Ards and North Down Borough Council’s Planning Committee unanimously approved our planning application on 26th January 2021 but a formal written approval can not be issued until Department of Infrastructure’s sign off! One year later Council want businesses and residents to issue their support to allow the ‘green paper’ to be issued which we support.

As part of the planning process the Council consulted with DfI Rivers in respect of drainage and flooding implications.  DfI Rivers’ Flood Inundation Maps indicated that the site is in an area of inundation emanating from Clandeboye Lake.   In the absence of sufficient assurance regarding the safety of the reservoir, DfI Rivers’ detailed modelling for an uncontrolled release of water from Clandeboye Lake, should it occur, indicated that there would be an unacceptable combination of depth and velocity for this development proposal.  DfI Rivers objected to the Planning Application in this regard.

In assessing the proposal, the Planning Service exercised its judgement and considered many issues.  This process of ‘weighing up’ the relevant factors is often described as the ‘planning balance’.  In recommending the proposal to be approved by the Planning Committee, the Planning Service considered that the concerns raised by Rivers Agency in relation to the reservoir, were outweighed by, among other factors, the positive benefits of this redevelopment scheme, which will deliver significant regeneration benefits to an area long neglected and awaiting positive intervention. 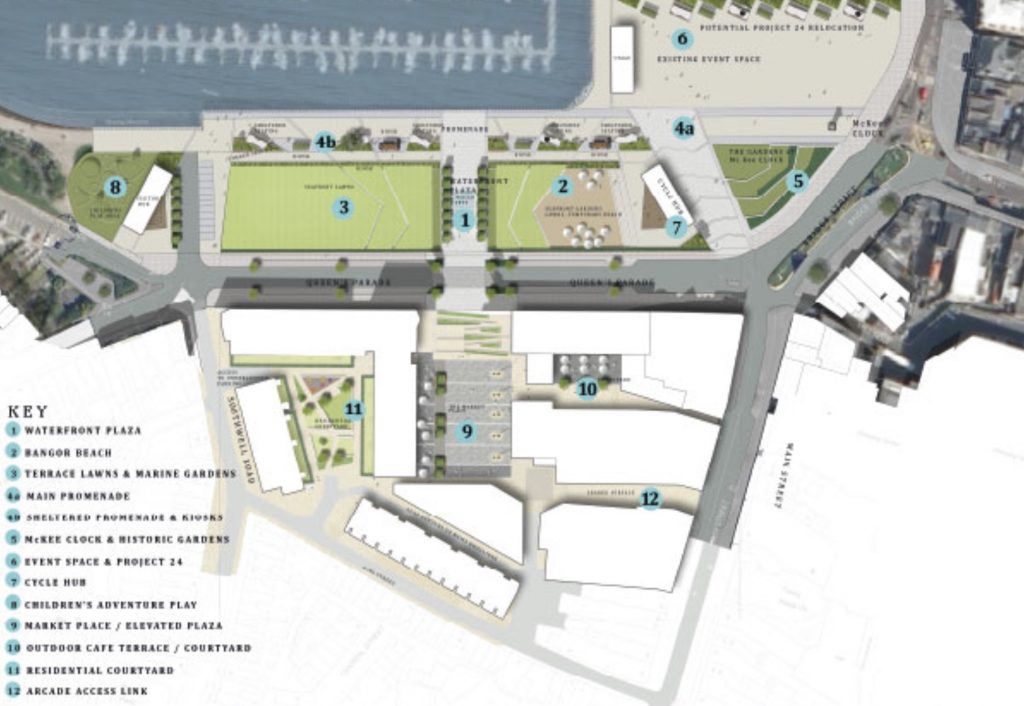 Notification of DfI Planning: Planning legislation requires the Council, where it proposes to approve a development contrary to the advice provided by a statutory consultee, to notify DfI Planning of its intention and prevents a decision from issuing within 28 days.  In February 2021 the Council was notified by DfI Planning that it could not grant planning approval until further advised – as the Department was considering whether the proposed development raised issues of such importance that it could be considered to have a significant regional impact (in respect of setting aside the policy to which DfI Rivers has referred in its objection), and whether it was more appropriate for the Department to ‘call-in’ the application and make the determination itself.

DfI Rivers has since undertaken a review of the reservoir inundation model and determined that the potential impact on the proposed Queens’ Parade development site is reduced; however, its position in relation to its objection under the relevant flooding planning policy remains.

One year on from delaying the Council in issuing its agreed planning approval, DfI Planning has made no further determination on the scheme.  The impact of this delay on the proposed regeneration of Bangor is extremely detrimental to residents, businesses and potential investors and has very significant implications for the future of the town and wider Ards and North Down Borough.

The development agreement partners have spent the last year engaging with DfI Rivers and DfI Planning to try to find a solution to this impasse and have given the Department all information possible to allow it to work through the ‘complex’ issues it has identified. With no progress made over a 12-month period, and no easy potential solution in sight, we are now focusing on asking the Minister simply to support the Council’s decision on this planning application and to allow Bangor Marine to progress towards starting work on site.

If you are a Bangor resident or business and back the Queens Parade development, you may be interested in writing to the Minister for Infrastructure, Nichola Mallon, asking her to support the Council’s decision to approve this planning application and secure this critical £50M investment for Bangor.  You may wish to highlight:

You can write to the Minister at: Department for Infrastructure, Private Office, Clarence Court, 10-18 Adelaide Street, Belfast BT2 8GB

For further information on this visit the council’s website https://www.ardsandnorthdown.gov.uk/business/bangor-regeneration/queens-parade

Great to meet you @AndrewBowie_MP and we look forward to delivering this much needed project for Bangor.

First thing this morning I had the huge privilege of meeting @BangorMarine, Mayor @KarenDouglas_NI and others to congratulate them, @StephenFarryMP & all involved in their successful and hugely ambitious Levelling Up bid to transform the front!

Parliamentary Under-Secretary for the Department of International Trade, Andrew Bowie, today visited the City of Bangor to congratulate @BangorMarine on securing £9.8M from the UK Government’s Levelling Up Fund.

Delighted with the announcement! This new status makes the Queen’s Parade development scheme even more important for Bangor’s future as a go-to destination for tourism and investment. The tide is finally turning for the new city, and we’re excited to be part of the next chapter!

Ards and North Down Borough Council is delighted that Bangor has been successful in its bid for City Status as part of the 2022 Platinum Jubilee Civic Honours Competition.

Read the full story, including the City Status Bid, at http://www.ardsandnorthdown.gov.uk/news

Sign up to our Newsletter
Stay up to date with all developments on The Queens Parade Project. We promise to not spam you, just send you great stuff!